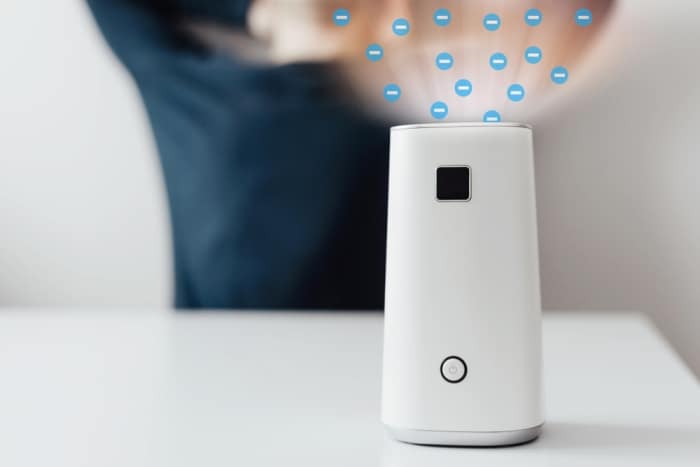 Are air ionizers safe for pets? Adding an air purifier to a room helps get rid of potentially harmful particles, including bacteria, viruses, mold spores, and dust. However, not all purifiers are built using the same technology.

An air ionizer is a unique type of purifier designed to knock particles out of the air, rather than trapping them in a filter. In recent years, the safety of these ionizers has been questioned by environmental groups and consumers.

The concern is that these purifiers generate ozone, which is known to be a harmful byproduct when inhaled by humans. Based on the latest research, is it safe to place an air ionizer in your house? Is it safe to use one around your pets?

The answer to these questions may depend on the type of air ionizer that you use. However, any amount of ozone may be bad for smaller creatures such as dogs and cats.

There are two primary types of air ionizers. Electrostatic precipitators and ion generators both use ion technology to charge negative ions that bind to harmful particles floating in the air.

Both types of ionizers are known to produce ozone. Ozone is a gas that is found in the upper and lower atmospheres of the Earth. It is also a man-made gas.

Man-made ozone has both positive and negative effects on human health. Ozone can absorb UV light, helping to protect your skin from UV radiation. However, it also reacts negatively to various molecules in your respiratory system, increasing the risk of various respiratory issues when inhaled.

Some of the symptoms of respiratory problems include throat irritation, coughing, wheezing, and a tightness in the chest. Prolonged exposure may even lead to permanent damage to the lungs.

Typically, electrostatic precipitators produce high enough levels of ozone that most health professionals advise against using them. However, there are many ion generators that produce limited amounts of ozone and therefore carry a lower risk of developing respiratory issues.

Air ionizers work differently from other air purifiers. Purifiers containing HEPA filters, activated carbon filters, and other forms of filtration media rely on fans to pull air into the purifier and through the filter to catch airborne particles.

The air ionizer does not use a filter to purify the air. Instead, it discharges negatively-charged ions to pull the particles down.

The negative ions and the positively-charged particles bind together, creating a heavier particle. With an electrostatic precipitator ionizer, the heavy particles are attracted to a flat collection plate. Homeowners can then remove the plate and wipe it clean.

With an Ion generator, there is no collection plate. The heavier particles simply fall to the ground. While most of the particles fall to the ground, some particles obviously land on other surfaces. These dirt particles may land on your entertainment center, shelving, tables, or other furniture. However, regular dusting and sweeping help eliminate them completely.

Instead of trapping the harmful particles, an air ionizer attracts the harmful pollutants so that they are too heavy to remain in the air. Removing these particles from the air also helps to eliminate odors, including pet odors.

The process of eliminating bacteria and other harmful particles is beneficial for everyone in the house, including dogs and cats. However, there is still the threat of ozone in the air.

Regulations on Products That Generate Ozone

Due to the dangers of inhaling ozone, the government has stepped in and created regulations concerning the sale of air ionizers and other products that generate ozone.

Over the years, the Environmental Protection Agency (EPA) has researched the effects of ozone on humans. Based on their research, they recommend that people limit their exposure to environments containing more than 50 parts per billion (ppb) of ozone by air volume.

The typical indoor space may already contain 10 to 20 ppb of ozone. Adding an air ionizer that produces 30 to 50 ppb can easily create an unsafe environment and increase the risk of respiratory issues and lung damage.

Based on these recommendations, the US Food and Drug Administration (FDA) developed regulations for the labeling of products that generate ozone. While the wording of the regulations can be confusing, the FDA basically requires manufacturers to label their products if they may generate more than 50 ppb of ozone.

These recommendations and regulations do not stop the sale of harmful air ionizers. However, manufacturers must correctly label their products to help consumers determine the amount of ozone generated by the air ionizer in question.

How Effective Are Air Ionizers?

The ionizing technology helps to remove dust, pollen, mold, bacteria, tobacco smoke, and odors from the air. However, this technology is not as effective at removing larger particles, such as dander.

People that suffer from pet allergies are rarely affected by the pet hair itself. Allergic reactions to pets are typically triggered by the dander, which may get trapped in the pet hair.

Pet dander is comprised of microscopic dead skin cells from your pet. Like other particles, the dander can easily float into the air and settle on surfaces. Clumps of pet hair also often contain dander.

As the dander or pet hair gets attached to furniture or carpeting, it may attract dust mites. The presence of dust mites can lead to additional allergens in the air, creating an even more hostile environment for allergy sufferers.

Unfortunately, pet dander is typically too large to bind to the negative ions from an air ionizer. The negative ions can bind with particles measuring 10 microns in size, while pet dander is often between 2 and 10 microns in size. While the ionizer may get rid of some of the larger dander particles, most of the dander will likely remain in the air.

Alternatives to Using Air Ionizers in Your Home

Whether you want to eliminate pet dander and odors or keep the air cleaner for your pets, there are safe alternatives to using air ionizers. As mentioned, air purifiers that use filters are often much more effective at removing pet dander and smaller particles in the air.

These purifiers do not produce ozone. They simply collect particles as they pass through the filters inside the air purifier. Along with eliminating the risk of ozone, an air filter can help create a safer environment for everyone in your house, including your pets.

The main types of air purifiers to consider include the following:

The HEPA filters offer the most effective method of removing particles from the air. These filters include fiber-like material that is folded into an accordion shape to create a larger surface area and trap more particles. The one drawback is that these filters do not help eliminate odors or gases.

Activated carbon filters have a porous surface for absorbing particles, helping to trap a variety of substances from the air, including chemicals, gases, and smoke. You can also use these filters to eliminate odors.

UV technology helps to convert oxygen and water into hydroxyl and ozone. These molecules bind with the harmful particles in the air, converting them into carbon dioxide and water. This method helps to kill bacteria, viruses, and odors. However, it is most effective when combined with air purifiers containing filters.

These three options are all safe to use around your pets. While a UV lamp may generate small levels of ozone, it also helps to eliminate the ozone in the air. The HEPA filter and the activated carbon filter also help trap pet dander, dust, and other debris floating through the air.

The most effective and safe air purifiers tend to combine all three of these purification methods. The air first gets filtered through a HEPA filter and an activated carbon filter before the UV technology is used to get rid of bacteria and viruses.

Conclusion – Can an Air Ionizer Harm Your Pets?

While an air ionizer does help eliminate some harmful particles from the air, it also generates ozone, which is considered potentially dangerous at even the lowest levels.

The FDA and EPA both offer recommendations and regulations for the manufacture and purchase of air ionizers and other ozone-generating products. The regulations require air ionizers to produce fewer than 50 ppb of ozone by air volume. However, these purifiers rarely include statistics to let consumers know how much ozone they generate.

As ozone is a potential danger, air ionizers may not be safe for your pets or anyone else in your home. If you want to eliminate pet dander and pet odors in your home along with other pollutants, there are safer solutions.

How To Use Ozone Generator In Home
Ozone Air Purifier (A Definitive Guide)
What Are The Benefits Of An Air Purifier?
How To Purify Air From Mold Smoke