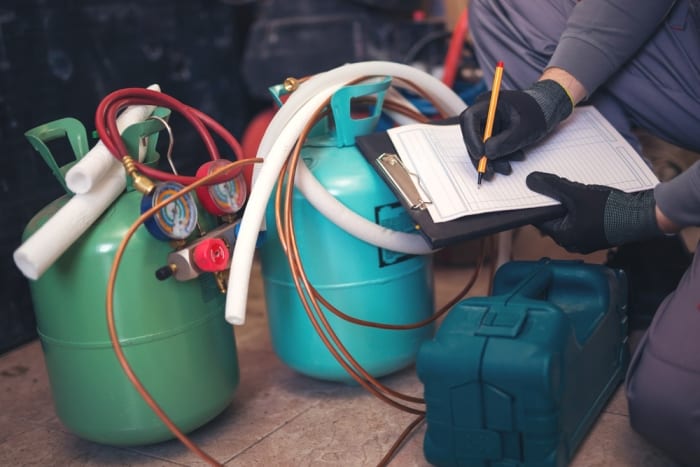 Picking the right type of Freon for home AC can be very confusing even if you’ve been using an air conditioner in your home for a long time. Imagine for a moment that you’re planning a party for one of your best friends. You’ve spent weeks planning everything from the décor to the dinner, the playlist and guest list, and everything in between. You know that you need something to help put the final cap on the whole thing – and what better way to do that, you figure, than popping the cork? What better way to celebrate a birthday than with a nice, classy bottle of wine. There’s just one problem – there are so many different types of wine out there, and while you couldn’t tell a Bordeaux from a Shiraz or Sauvignon Blanc, you know that your friend can. Besides, while you don’t know much about wine, you do know that different bottles come across different ways. A well-chilled bottle of champagne says something very different from a run of the mill merlot, which is itself different from wines that don’t even feature cork and instead utilize screw caps. There are many options, and many good ones at that – you’re just not sure what they are.

Types of Freon For Home AC

Picking the right type of Freon without adequate information can feel just like that. You know the subject of refrigerants and cooling agents in general and Freon in particular is nuanced. You might even know that it’s something that’s attracted a great deal of scientific, environmental, and economic consideration over the years. Even so, you’re neither a chemist nor an economist nor an environmental expert – you’re just a business owner or domestic consumer trying to get the best product that you can.

If this sounds familiar, then this quick overview of the different types of Freon – from their functions to their economic and environmental impact to their evolving status – is for you.

Do You Need an AC?

First, it’s worth asking whether or not you even need an AC in the first place. To those of us who live in hotter climates with either a sticky humid summers or dry Mediterranean weather, this can seem odd. But for many, especially those in northern climates, an AC isn’t a given.

Even if you don’t need an AC in your own home, however, you may eventually need one for your business. It’s generally understood that air conditioning systems are among the necessary and expected amenities in your place of business.

What’s more, Freon isn’t just used in air conditioning. It is also used as a refrigerant. As such, while some of Freon’s most prominent uses are indeed in the AC industry, which is itself most important to hot weather climates, any business owner would do well to know about Freon and its status.

So let’s tackle the big question – what exactly is Freon? For those not in the know, Freon is a type of refrigerant and cooling agent that was developed nearly a century ago as a replacement for ammonia and other then-current forms of cooling. At the time, Freon was a much safer and more efficient cooling solution, and so it spread in popularity. It would later see its use expand, both to the AC industry, as stated, as well as the aerosol one, the latter of which has been ended in recent decades due to Freon’s impact upon the environment. While certain forms of Freon can be harmful to the environment in general and ozone layer in particular, the past few decades have seen newer, safer forms of Freon developed to deal with these issues.

Of course, Freon isn’t “just” Freon, in the same way that wine isn’t just wine. As described above, there are countless different kinds of wine, and any discerning connoisseur will be able to tell you which are their favorites, which vintages and types are best for any given occasion, and why. Likewise, there are many different types of Freon, and experts can immediately tell which types are best suited for your needs. Some of the most notable types of Freon on the market today include:

The Best Type for You

Those are some of the most common types of Freon on the market, but the question still remains – which type is best for you? That’s going to boil down to a variety of factors, including:

You will also want to take into account the economic considerations of using Freon. Part of the reason types of Freon such as R-22 has been heavily regulated or banned in developing countries is that those economies, it is presumed, are developed enough to move on to new cooling agents without a severe economic hit. In addition, these countries are retrofitting ACs, certain car cooling apparatuses, refrigeration apparatuses, and other such systems to make use of the existent supply of the comparatively-safer R-410A. Those older forms of Freon were original designed to replace outdated, more dangerous cooling agents, and now R-410A and newer cooling agents are doing the same.

At the same time, these options are not as economically-viable in certain developing countries. Some countries that feature an infrastructure that’s decades behind that of the US, UK, EU, Japan, and other top-tier economies can’t upgrade as quickly or as easily. In these instances, older forms of Freon are still being used while the countries continue to develop.

Knowing the economic and infrastructural status of target customers can go a long way towards determining which form of Freon is right for their needs, or your own at that.

Expertise You Can Trust

When it comes to something as important as dealing with a topic as economically, chemically, and environmentally complex as Freon, you’re going to want to take advantage of the advice of experts. They can help you determine the right type of Freon for you, work out the best method of installation and usage, fill you in on any special safety precautions, and keep you apprised as to everything happening in the fast-changing world of Freon usage and regulation.

To come full circle, if expertise is important enough to utilize when seeking out wine-buying help for a party, it’s certainly critical when determining the right type of chemical cooling agent that your company is going to use for years or even decades to come.